Last Sunday, Donald Trump's Budget Director Mick Mulvaney stated his desire to cut Social Security Disability.  Appearing at the CBS program "Face the Nation", Mulvaney launched a baseless attack on SSD. His statement is plagued with falsehoods.  Here is what he said:

“Do you really think that Social Security disability insurance is part of what people think of when they think of Social Security? I don’t think so. It’s the fastest-growing program. It grew tremendously under President Obama. It’s a very wasteful program, and we want to try and fix that.”

I will address his baseless allegations one by one.


First, a Republican President, Dwight Eisenhower, signed Social Security Disability into law in 1956. SSD is certainly part of what people consider to be Social Security, including Republicans. In fact, the states with most persons on SSD are all overwhelmingly Republican.  These states are: Alabama, Tennessee, Kentucky, West Virginia and Arkansas. If Mulvaney messes up with SSD, he is messing up with the white-republican-rural voters who supported Trump. He should think twice before he opens up his mouth again to trash SSD.


Second, his claim that SSD is "the fastest growing program" is completely false.  Here is a graph from the Social Administration that shows that SSD enrollment has been dropping since 2014: 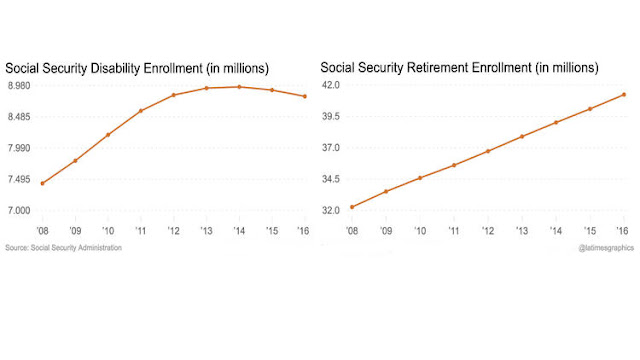 Finally, he claims that Social Security Disability is wasteful.  Disabled workers receive an average of $1,165 a month in benefits.  That is just $13,984 a year!  Disability benefits are extremely hard to obtain.  You can visit a recent article: "'This is not the American Dream' Says Woman Turned Destitute Waiting for Disability"  to learn how difficult and dehumanizing it has become for disabled Americans to win SSD.  Moreover, in 2012 the Social Security Commissioner explained before Congress that a study revealed that the error rate in over payments and under payments is less that 1% of all benefits.
Posted by Ivan Ramos at 7:08 PM